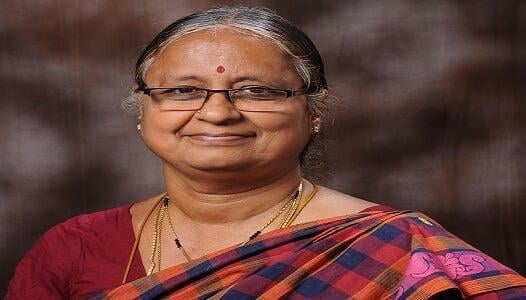 'At the outset, I thank the Almighty & my family for having been there with me throughout this Chartered Accountancy (CA) course. The first question everyone ask me is how did it all begin?

It began in 2004, when our son went against our suggestions to pursue the Chartered Accountancy course. We were apprehensive as engineering was the most happening thing back then and clearing the CA course had always been an uncertainty. My husband Shri K B Ramachandran a practising CA by himself, suggested that I too take up CA to create a conducive ambience for our son and I obviously laughed it off.

However, he kept bringing it on repeatedly till the time I warmed up to the idea. So finally I signed up for the course (PE-II equivalent of IPCC) in 2004. There were many challenges each of them individually capable of draining a person.

1) I was working as the branch manager in a private sector bank and the branch was located in a place 50 kms from my home; had to take two buses a day to reach my workplace and 2 buses on return.

2) My first son had enrolled into CA amidst our suggestions against it & and our second son had gotten into his adolescence; and my mother-in-law was ageing

3) I was mathematics post graduate so had no clue as to debit or credit or taxation for that matter. 4) Classes were out of the question as I had to run a household, run a branch travelling 100 kms a day.

5) Leave for exam preparation were never adequate nor certain (the longest leave I got for preparation+exams was 7 days including a weekend).

However, I went ahead with the course. My first son took up the work of getting me the correct books, scanners (never could use them for want of time) RTP (never could use them as well) etc. He would also let know the critical areas to focus. However he couldn’t teach me as I was not in a position to spare time. Sundays were the only time I could do with some study however every Sunday was not on offer as they were the only days wherein I could restore some order in the household or complete my social commitments. I did whatever I could, sincerely.

I cleared first group of PE-II in my second attempt. And cleared the second group in my third attempt (could be second as well forgot the number to be frank). Clearing second group involved some an interesting anecdote; I had written the costing paper and was sure of failing miserably. Called my kids and checked whether we could go for a small vacation as there was no point in continuing the exams further. We were all so excited about that. But my husband put his foot firmly down and made me write the Income Tax and Information Technology papers. And to everyone’s surprise and delight I cleared the second group and PE-II in that attempt.

However, I continued my banking career for two more years wanting to be part of Core Banking Solution (CBS) implementation in our Bank. Finally, I came out on Voluntary Retirement Scheme (VRS) on 31.03.2008 and started my Articleship in my husband’s firm. By this time my son had also completed his PE-II and had commenced his Articleship in a Chennai based firm.

Articleship had its own challenges. I was the oldest student in the firm; had a household to run; had to support both our sons as one was giving his 12th final exams and the other was about to give his CA final exams. Basically, I did CA alongwith many other equally important tasks at any given point. Maybe that helped me in keeping myself realistic. Towards the end of my Articleship the priority slightly shifted to helping my son clear his CA final examinations.

I cleared Group I of the final course in May 2012. Group II however proved to be much more elusive. I had to accept failures despite hard work; had to forego attempts for family commitments and even social commitments at times. Not until May 2017 could I clear Group II of CA Final examinations. It was July 2017 when I finally became a Chartered Accountant and applied for the coveted membership.

Some of the lessons that I picked along the way:

1. Leave the valuation to the examiner (though it is very tough).

I was about to shun my May 2006 attempt after a disastrous Costing paper (as per my evaluation); when my husband convinced me to write the remaining exams. I cleared my PE-II in that attempt.

2. Stress could act as a stimulant (though we may not realize while at it)

4. Family is one of the best support systems that we could rely upon for our career enhancement.

Now, I am a partner in the CA practice setup by my husband and being expanded by my son and his friends. Hope this phase turns out to be as eventful and as interesting as the student phase.' - CA N Saroja Ramachandran